First, I’m not a big overclocker. Second, I’m not going to use any TEC coolers for ultra fast performance. Third, I don’t have a canister of liquid nitrogen. So, nothing fancy, just air, common non-black processor and a little customized case are going to be involved. If you think it’s pathetic, just don’t read lines below. But if you value your money and want something for cheap, keep going. Still reading? Great! Just for you I’m going to reveal a little secret. 25K+ of CPU marks in 3DMark Vantage. It’s even more than i7 975 Extreme. Curious how I got those numbers? I knew you would be interested!

There’s a great tool called AMD overdrive which helps overclocking. You know it? Forget about it! It’s very unstable, at least on Windows 7 RC, which is the OS I’m running for quite a while. So I go directly to BIOS and raise HT reference frequency from 200 MHz to 220 MHz. Now it’s reported as 10% OC, which you can get from a simple formula. However, the real performance boost is different, lower actually.

Yes, I got it stable at ~2.4GHz running several tests including 3DMark, PCMark and several video games. But according to 3DMark Vantage, performance boost (judging by CPU score) was only 7%. Well, it’s not a big number, but it’s very close to Intel i7. Specifically Intel i7 975 Extreme, for fraction of the price. And we only talking about CPU benchmark numbers. 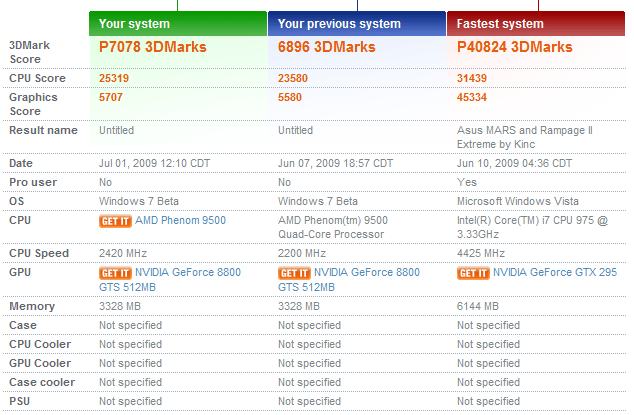 That’s weird magic, but I love to see my 100$ processor perform almost as good as that of 1000$ value. It even makes no sense to upgrade. Why should I? People on Phenom II X4 955 only get 11K marks, which is real bad compared to this one.

Luckily I also got memory bandwidth from 8.8 GB/s to ~10GB/s and latency from 115ns to 107ns. So if the application is memory intensive, I may hope to get better results, for up to 10%! Who knows?!