This is just an experiment I’ve planned for Christmas, to verify if powerlines are any good, a couple years after they became popular on the market.
So I picked a rather new adapter kit, which was supposed to deliver 500 megabits over a 100 Mbit connection, which sounded kind of interesting.
Namely this one: TP-Link TL-PA4010KIT (AV500 Nano Powerline Adapter Starter Kit).
It is advertised as “high-speed data transfer rates of up to 500Mbps”, so let’s see what the real figures would be.
As a side note, I paid 45 Canadian dollars before tax for the kit, which includes two adapters and two good quality cat5 cables (see below why I stressed that). 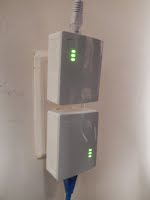 I did several TCP network speed tests using Passmark Performance Test v8 b1027, latest version at the moment of writing (no affiliation with these guys).
The measured PCs (later being referenced as A and B respectively) are an Acer 1810T laptop (year 2009, I believe) and my custom made PC, using built-in LAN, motherboard is P8Z68-V PRO/GEN3.
A is obviously a wandering asset, so I am going to stick it in every outlet I find, and B just sits there stationary in the bedroom, connected to 8-port Gigabit switch from Trendnet (good one, with a metal case).
Both computers are said to be capable of going as high as a GBit/Sec, but I don’t think I’ve ever seen any of them go higher than 800 Mbit/Sec in different setups.

The first two tests were done without a powerline adapter at all, just running over a gigabit network, in order to test network cables and the infrastructure in general.
(1a) uses a cable, that would later be hooked up between A and a wall AC.
(1b) is a cable that’s between B and a wall AC respectively.
In both of these tests, a cable goes to the aforementioned Gigabit switch, logically from A to B.

Other test titles are pretty much self-explanatory. So, here it goes: